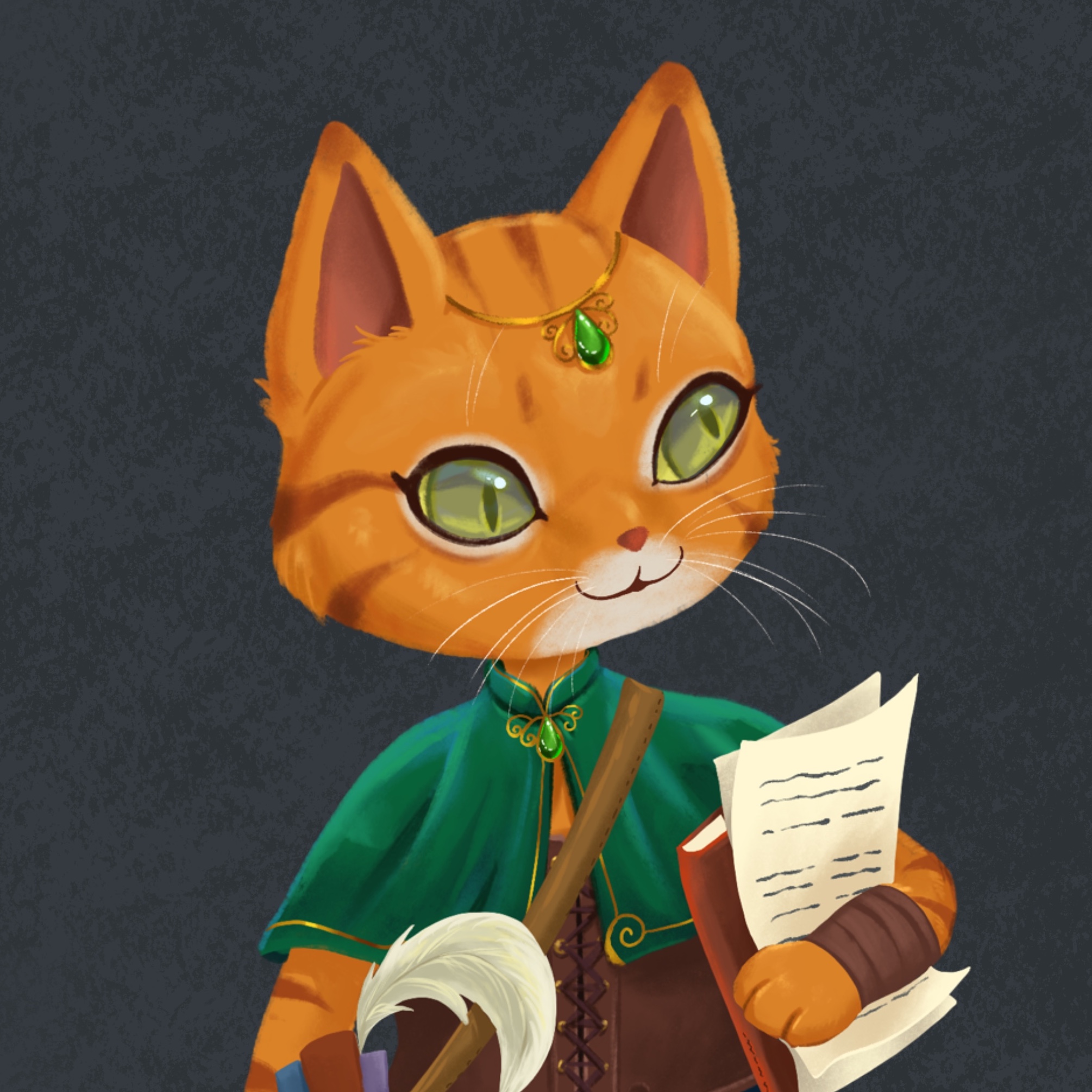 “Twisted yarn,” Arya cursed as she examined the Town Hall’s pantry. It was Schrödinger Day, Whiskerton’s most joyous festival, and the councilcat—with pristine ginger coat, green eyes, and a penchant for sunbathing—found herself in somewhat of a quandary.

Schrödinger Day was the anniversary of Whiskerton becoming a town. The townscats always celebrated their Foundation Day with much pomp and grandeur, even umpteen generations later when Arya, the councilcat in charge of planning, found herself staring at the pantry’s contents.

You see, she had diligently instructed the Town Hall’s chefcat to bake tuna biscuits, which were the obvious choice of celebratory snack for this occasion’s evening cream. But that morning, a frantic chefcat reported that all the tuna biscuits she’d spent the entire night preparing had vanished. And no, it wasn’t the town’s mischievous kittens who ate them. The tuna biscuits disappeared before her very eyes!

Vanishing items weren’t an uncommon occurrence in Whiskerton–though, to be fair, food hardly ever disappeared–and Arya figured the tuna biscuits would turn up again sooner or later. But she couldn’t count on them returning in time.

And so, after shoving her panic to the back of her mind where she commanded it to ‘stay’ pending further instruction, Arya took the matter of celebratory snack into her own paws by examining the pantry for other options. But when she saw its contents, the panic threatened to break free. No, no, Schrödinger Day cannot be ruined!

There were only two snack options available: cheese ribbons or salmon shortcakes. And herein lay the problem: while cats were curious and enterprising creatures, they were also awful sticklers for tradition, especially when it came to Schrödinger. And on Schrödinger ’s Day, only ever one snack was served with evening cream.

But with just these two options available for the single celebratory snack, Arya was faced with an unfortunate choice. The townscats were evenly divided in their love for these particular snacks; either choice would result in half of them being disappointed. And Arya always avoided disappointing anyone if she could help it. 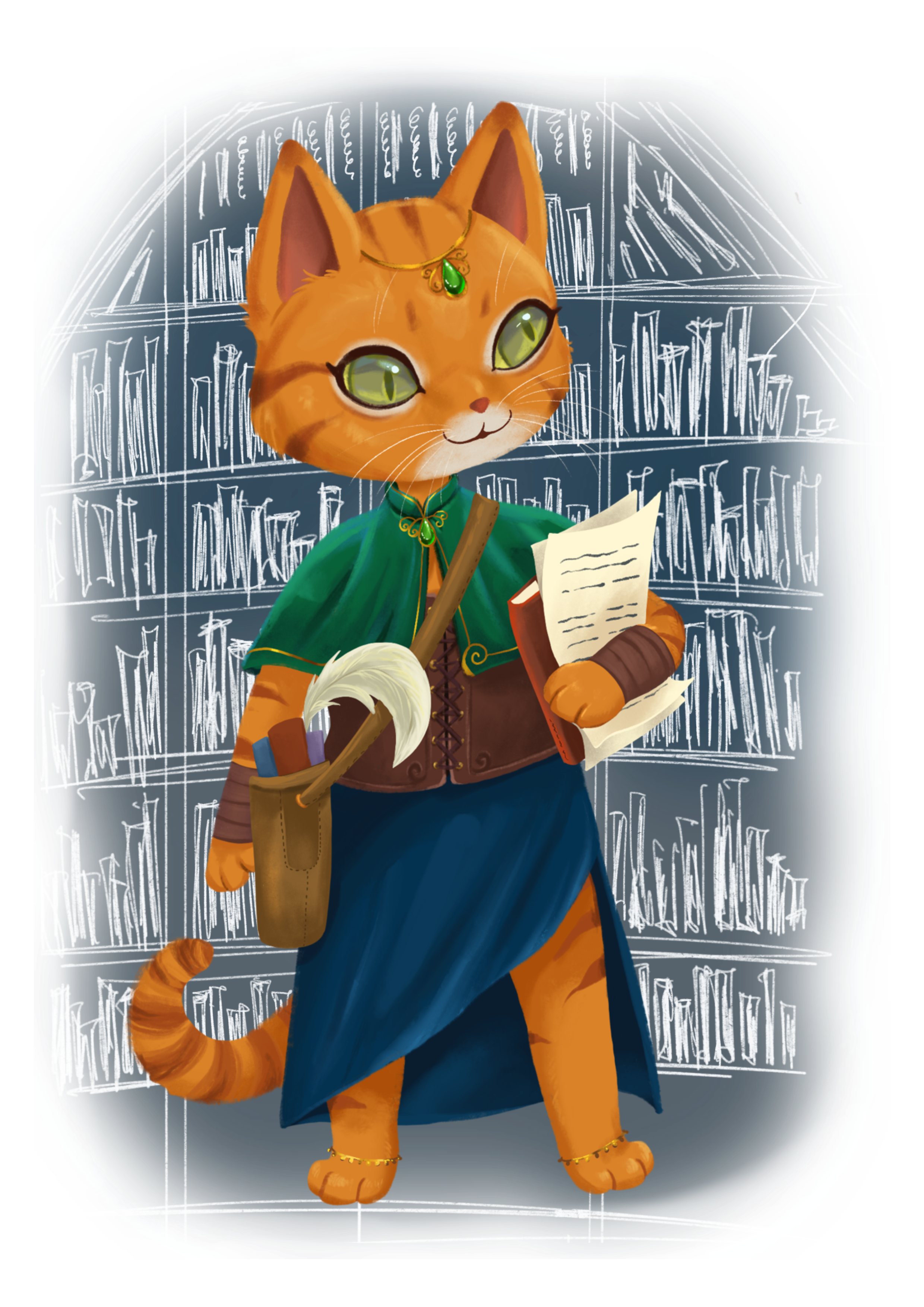 Arya’s thoughts raced hither and thither, threatening to implode, panic rearing its wretched head. She eventually realized she could either stay there, paralyzed by her thoughts, or she could cat up and make a decision. So, make a decision it was, but she would do so by consulting a marble. Marbles could be helpful when faced with a difficult choice between two equally weighted options.

She went to her office within Town Hall, a cozy room that bore an abundance of books, smells of fresh ink and parchment, and sunbathing spots. And a marble or two.

Whiskertese marbles had a curious property: they were red and blue at the same time, a superposition of two colors, until someone looked directly at them. When directly observed, a Whiskertese marble would either turn red or turn blue, with a fifty percent chance of either color. Should one pack a room with a hundred Whiskertese marbles, and thereafter look directly at each individual marble, close to half would turn red and close to half would turn blue. There was no way to tell beforehand which of the two colors a marble would become. 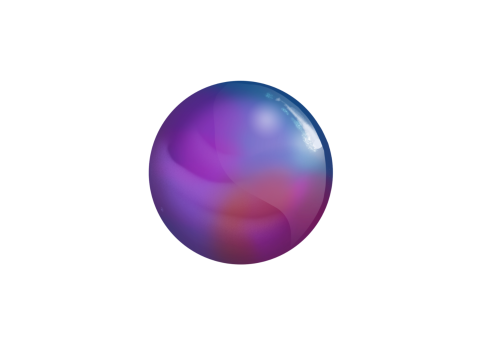 Arya pawed one of the marbles out of a storage box, careful to avoid looking at it directly.

“If it turns blue, I will choose cheese ribbons. If it turns red, I will choose salmon shortcakes,” she declared aloud to her office’s occupants: giant piles of books and paper, half very important bureaucratic documents, half napping perches.

But, alas, Arya never got her answer, for just as she was about to observe the marble, a commotion outside her window snatched her attention. And what she saw when she bounded over to the window unleashed her panic in all its glory. For in clear view was the town square, the statue of Schrödinger, all the props, tables, and decorations the adult townscats had meticulously assembled for the festivities, and: a band of excitable kittens tearing through everything.

They headed straight for the statue. Arya leaped out the window and hastened after them.

“No, no! Halt, kits!” Arya chastised, struggling to maintain the appearance of calm—at the end of the day she was a rather gentle cat, and it wouldn’t do to lose her temper on Schrödinger Day, now would it? “You were given strict instructions to stay aw…” But she trailed off when it was evident they were deaf to her admonishments; something else had captured their attention. She followed their collective gaze upward to the branches of the Great Scratching Tree. And then blew an exasperated huff between her teeth.

Luna, Luna, Luna. While the townskittens had been instructed to steer clear of the preparations until just before the celebration, she should have known to keep Luna in particular occupied far away from the square. For up in the now-shredded streamers of the Tree, extending a raring paw toward a purple feather that had popped into existence right above the statue, was the town’s most mischievous, excitable, and destructive kitten of all: Luna.

Technically, Luna was a tad old to be called ‘kitten’, but she was small for her almost-ready-to-be-an-adult-cat age. Her expression was permanently that of raised eyebrows, had she eyebrows at all, which could be interpreted as wonder or concern, contingent upon the circumstances. Her fur was short and ginger, prone to a slight grunge since her insatiable curiosity left her easily distracted during a bath.

Luna teetered on the edge of a branch, hanging close to the statue. Hanging precariously close to the decorative contraption that was the most important part of the occasion, more so than the celebratory snack: a glitter machine atop Schrödinger’s hat.

You see, the townscats of Whiskerton enjoyed uncertainty. They also enjoyed shiny things. Each year, as a signal to commence the Foundation Day celebrations, a flurry of glitter was released over the statue.

The glitter machine consisted of a single marble connected to two glitter vials. During the opening ceremony, a designated councilcat looked directly at the marble. The marble turned either red or blue, and one of the vials would pop open depending on the marble’s color, showering colored glitter on their town’s beloved founder. In the days leading up to the holiday, the townscats greatly enjoyed debating which of the two colors would be released. This year, a green glitter vial was linked to the marble’s red, and a purple glitter vial was linked to the marble’s blue.

Forget the evening snack; if Luna damaged the glitter machine, the celebrations would be ruined. Arya shouted to Luna, but of course, at that moment, Luna’s whole world consisted solely of the purple feather. There was no room for admonishments, glitter machines, or even other cats.

Arya scanned the area for something to lure Luna away, for she feared tipping the kitten off the branch if she attempted to climb the tree herself.

Her eyes fell on a familiar assortment of tools scattered around an open toolbox by the statue’s pedestal. It was as if a buildercat had abruptly abandoned his task for a nap or a bath. She knew exactly to whom that toolbox belonged.

“Blade?” Arya called, hoping her best friend would hear her, wherever he was. 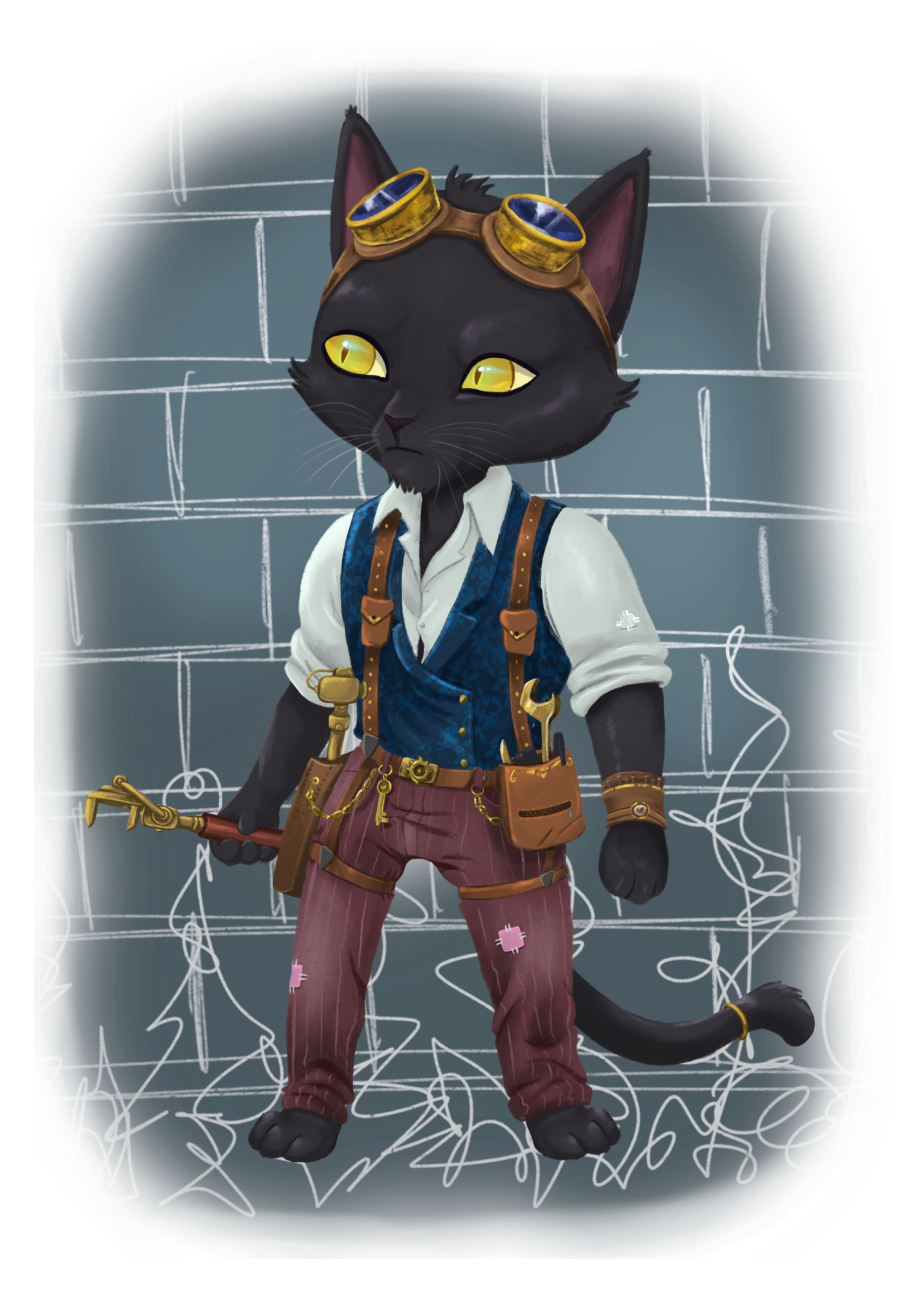 Blade was an agile black cat with blazing yellow eyes, skilled with marbles and tools, and even more skilled at being easily startled. Unsurprisingly, the sudden echo of his name off the buildings that lined the square provoked a monumental leap into the air, back arched. Where had he been? Curled up, fast asleep, tucked under a bush, dreaming of pigeons.

Blade’s protests at his nap’s interruption ceased instantly when he spotted Luna. He scampered to join Arya and the kittens at the foot of the tree, calling to the maddening rascal about how hard he worked on that glitter machine and that she should come down if she knew what was good for her.

It didn’t work, of course.

The cats scrambled for ideas, and even the kittens around them chimed in excitedly.

“Do you think we can distract her with another feather?” Arya said.

“I haven’t seen another pop up around here for a few hours,” Blade said.

“How about tossing up a ball?” one of the kittens piped in.

“Or a felt mouse?” said another.

“We would not be able to guarantee that it would head in Luna’s direction,” Arya replied, not unkindly.

But it turns out their ponderances were in vain, for a series of rather unfortunate events occured:

First, Luna lost her balance, tumbling head-first towards the feather.

Then, her tail whipped around, headed straight for the glitter machine.

Blade noticed Luna losing balance and jumped, hoping to intercept her before she hit the glitter machine. Unfortunately, Blade cannot jump very high unless he is startled, and thus, did not make it even remotely close to the kitten.

Machine, kitten, feather plummeted as one, snapping up the cat on the way down.

Luna landed on her feet, feather proudly clamped between her teeth. One look at Arya’s face set her darting away to inspect her prize.

Poor Blade had landed in his own toolbox, along with the glitter machine. The lid of the box clapped shut over his head.

Even though dread about ruined celebrations coursed through Arya, reflexive excitement began to stir in her gut, and it was evident that she wasn’t alone: the kittens whispered and shuffled their feet buoyantly.

For what they had before them was a glorious uncertainty. A cat inside a box, and with him the glitter machine! The machine had likely been set off by the fall, which meant Blade could be swathed in purple glitter. Or he could be green. No one could be sure until they looked. Just like a Whiskertese marble. What a magnificent conundrum!

Whispers turned to impassioned shouts of color guesses, and an enlivened crowd coalesced in the square as word spread through the town like wildfire. Arya could hear Blade’s muffled mutterings about interrupted naps and useless kittens and inconsequential feathers as he attempted to push open the lid, but she couldn’t have any of that, now, could she? For as she gazed at the enthused gathering cats, she realized Schrödinger Day wasn’t ruined at all! This novel uncertainty was too captivating.

She hopped lightly onto the lid so that Blade couldn’t leave. His mutterings grew louder, and this time “obnoxious best friends” were added to his list.

Oh, she would let him out eventually, of course, and even slip him extra snack portions for being such a good sport, but she’d let the townscats have their fun first.

“Listen up,” she called out. “I have a proposal for you, my dear cats. Let our celebratory snack be decided by the color of Blade’s coat. Green for cheese ribbons, purple for salmon shortcakes. What say?”

And, to Arya’s delight, not a single cat objected.

(Well, except for Blade.) 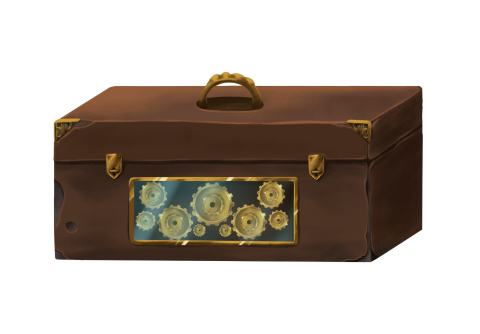